A new natural cosmetic ingredient will now enrich Clotholine® range. CLOTHOLINE®LV is the natural version of Clotholine®, a synthetic active ingredient that increases the sense of well-being as well as skin longevity. Thanks to an innovative extraction process, Syntivia isolated the natural molecule of interest and validated its activity compared to the synthetic version.

CLOTHOLINE®LV is based on Syntivia’s innovative active ingredient Clotholine®, which restores youth and improves well-being thanks to its effect on longevity protein Klotho. The Klotho Protein is also known as the Youth Protein. When activated in a living organism, the Klotho protein increases lifespan (Kuro-o et al, 1997). A recent study provides the first evidence that the quantity of Klotho present in a living organism varies under the influence of environmental influences, more precisely chronic psychosocial stressors. Klotho is a new target to mitigate the effect of chronic stress on health and well-being (Prather et al, 2015).

CLOTHOLINE®LV is mainly composed of molecules naturally present in Cornflower Centaurea cyanus. In order to decide on the most appropriate Cornflower for the new active ingredient, several types of Cornflowers of different origins were studied and evaluated. The Bleuet Cornflower we finally selected is cultivated in France and compliant with Chinese regulations on cosmetic products and ingredients. To isolate active molecules from Centaurea Cyanus flowers at a sufficient concentration for CLOTHOLINE®LV, Syntivia used an exclusive soft extraction process.

To evaluate the new ingredient’s effect on the Klotho protein, the activity of the natural cosmetic ingredient was compared to its synthetic version. The Klotho protein was labelled and quantified by automated fluorescent microscopy (Figure 1). The Arrayscan microscope enables the analysis of large data sets and thousands of cells and is ideal for live cell screening. Results are precise, highly reliable and statistically significant. 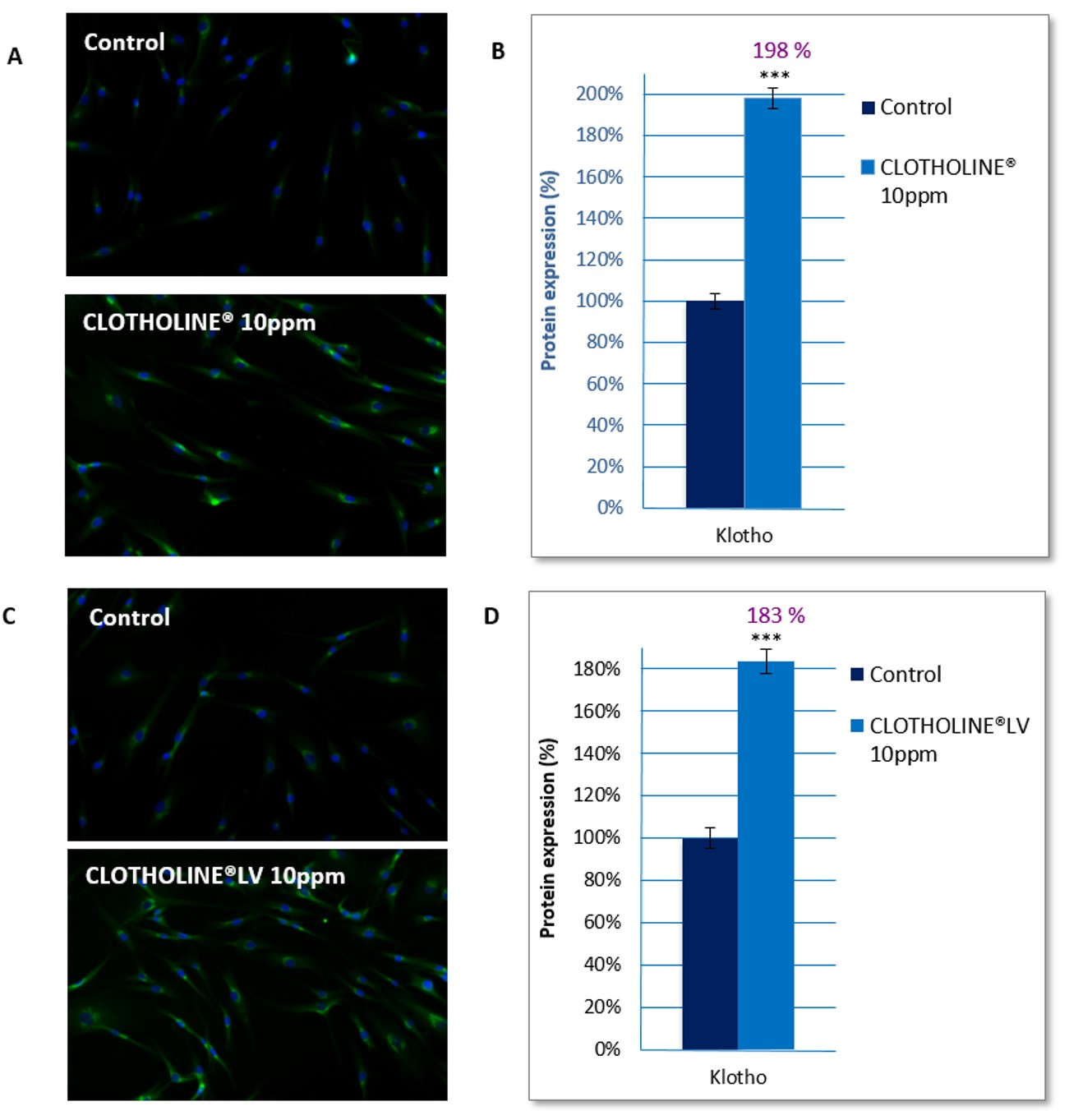 This in vitro study demonstrates that Clotholine® and CLOTHOLINE®LV have a comparable effect on Klotho expression. Indeed, Clotholine® increases the expression of Klotho by 98% when compared to the control, whereas the CLOTHOLINE®LV Centaurea cyanus flower extract raises it by 83%.

Both Clotholine® and CLOTHOLINE®LV promote the longevity of the dermis by activating the synthesis of the Klotho protein to preserve cells from aging. Syntivia has developed CLOTHOLINE®LV for the account of Sollice Biotech.